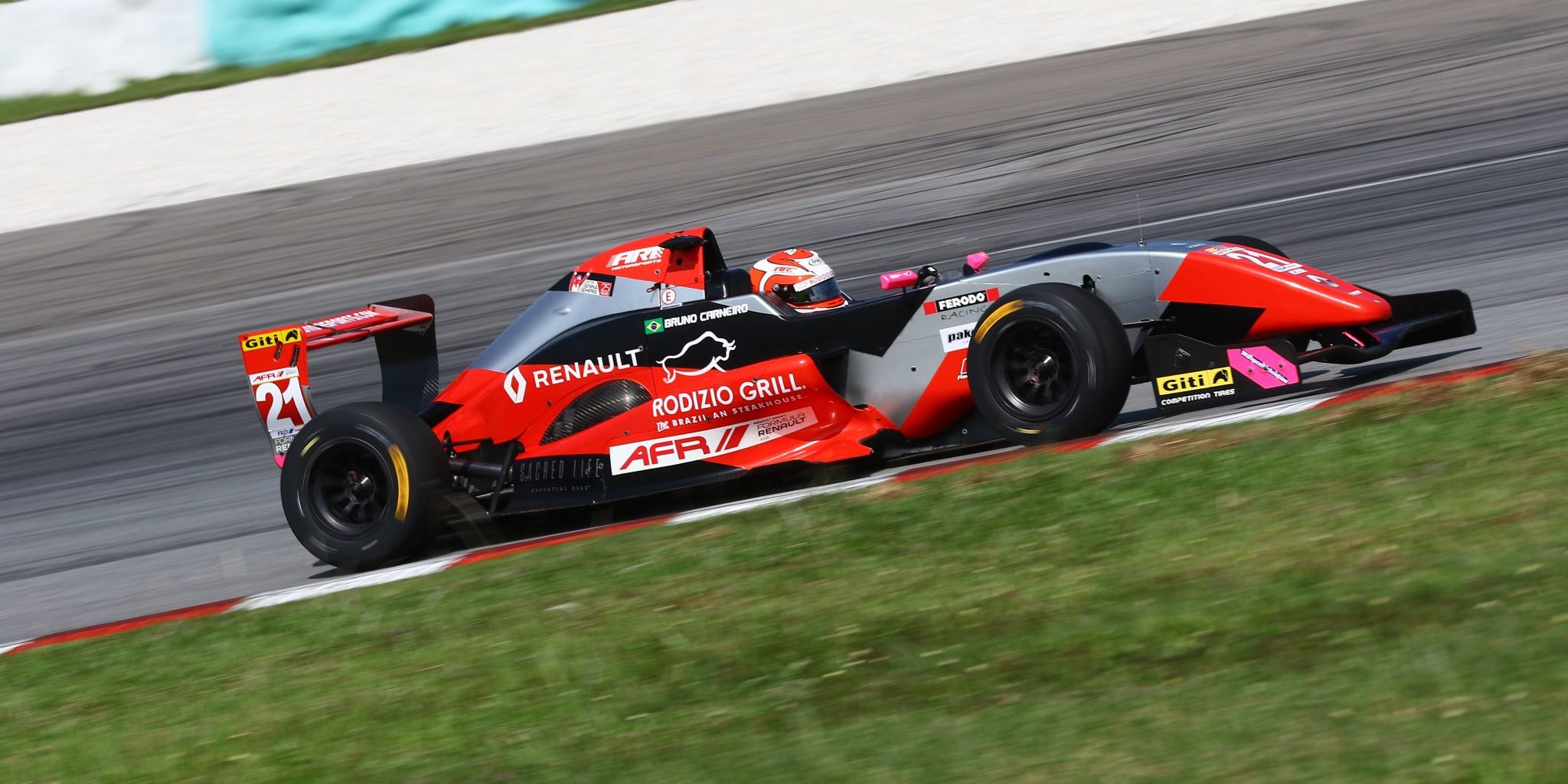 Meanwhile, team-mates Ni Weiliang and series debutant Nicholas Lai captured important point finishes to complete a strong points tally for the team. Once again, the Brazilian-born Utah-resident Bruno Carneiro led the way within the team, qualifying second for the opening race of the weekend on Saturday morning. Weiliang qualified in seventh and Lai in ninth.

Come the race one, the Rodizio Grill-backed driver did well initially to hold his second-place starting position. Carneiro’s pace dropped significantly in the second half of the race as his tires lost performance in the closing laps. He slipped to fourth.

The team did a few successful setup changes for the 10-lap second race on Saturday afternoon. Starting from second on the grid, this time Carneiro managed to cross the finish line in second with his fastest lap time being only one-tenth slower than the race fastest lap. The Brazilian driver had a clean if not a quiet Sunday’s Round 10, keeping the good momentum finishing second-place again.

Weiliang had a weekend of mixed fortune in Malaysia. After qualifying seventh for the opening race on Saturday, Weiliang waved goodbye to any chance of a far better result when he was forced into a spin by a rival. Eventually, he bounced back in race two on Sunday morning to finish in sixth. Unfortunately, the bad luck struck again in the last race of the weekend. Weiliang was forced to retire with a suspension failure on the second lap.

Joining the team for the first time this weekend was Nicholas Lai. The Macau driver had his first taste at the wheel of the Formula Renault 2.0/13 on Thursday’s non-official practice. Lai has fulfilled its objective of finishing the three races, climbing the Master Class podium in three occasions: second place in race one and three and third in race two.

Commenting about the race weekend, Team Manager Rodolfo Avila said: “Whilst it’s good to have a car finish in the podium twice with Bruno, we can’t help thinking that we could have achieved more from this race weekend. We tried a few new things out and learned a lot. Weiliang was pretty unlucky this weekend, and Nicholas improved throughout the weekend. The title fight is not yet decided. We now head to Zhuhai determined to carry on this momentum and hopefully add some more points and podium finishes to our tally. We want to end the season on a high note.”

The season’s showdown will happen at the Zhuhai International Circuit in China on 7th/8th December.

“First of all I’ve had a really good car this weekend. Unfortunately, I had a collision in race one and a suspension failure in race three. We did a lot of hard work on the set-up of the car and it was working really well this weekend. Race hard and clean in the next meeting and finish off the season with a strong end in the championship.” “It’s been a tough race weekend for me since it was my debut in AFR, and first time racing in Sepang. I have never ever been in such a technical track. So jumping into the Formula Renault from an F4, I must admit it’s a huge difference. My coach Rodolfo Avila did such an excellent job to get me through the weekend. I managed to get on the podium for all three races. Huge thanks to ART and its staff for their support! I can’t wait till the next time I race with the team again.” “It was a weekend of mixed emotions as we struggled with tire wear from the start which compromised our first race after serious graining on the set of tires I had. Race 2 and 3 were better as we got double P2 results but ultimately couldn’t get the win. We were closing in, very close. We have a big break between now and the final race so we will see what can come of it! Thank you again to the team.”