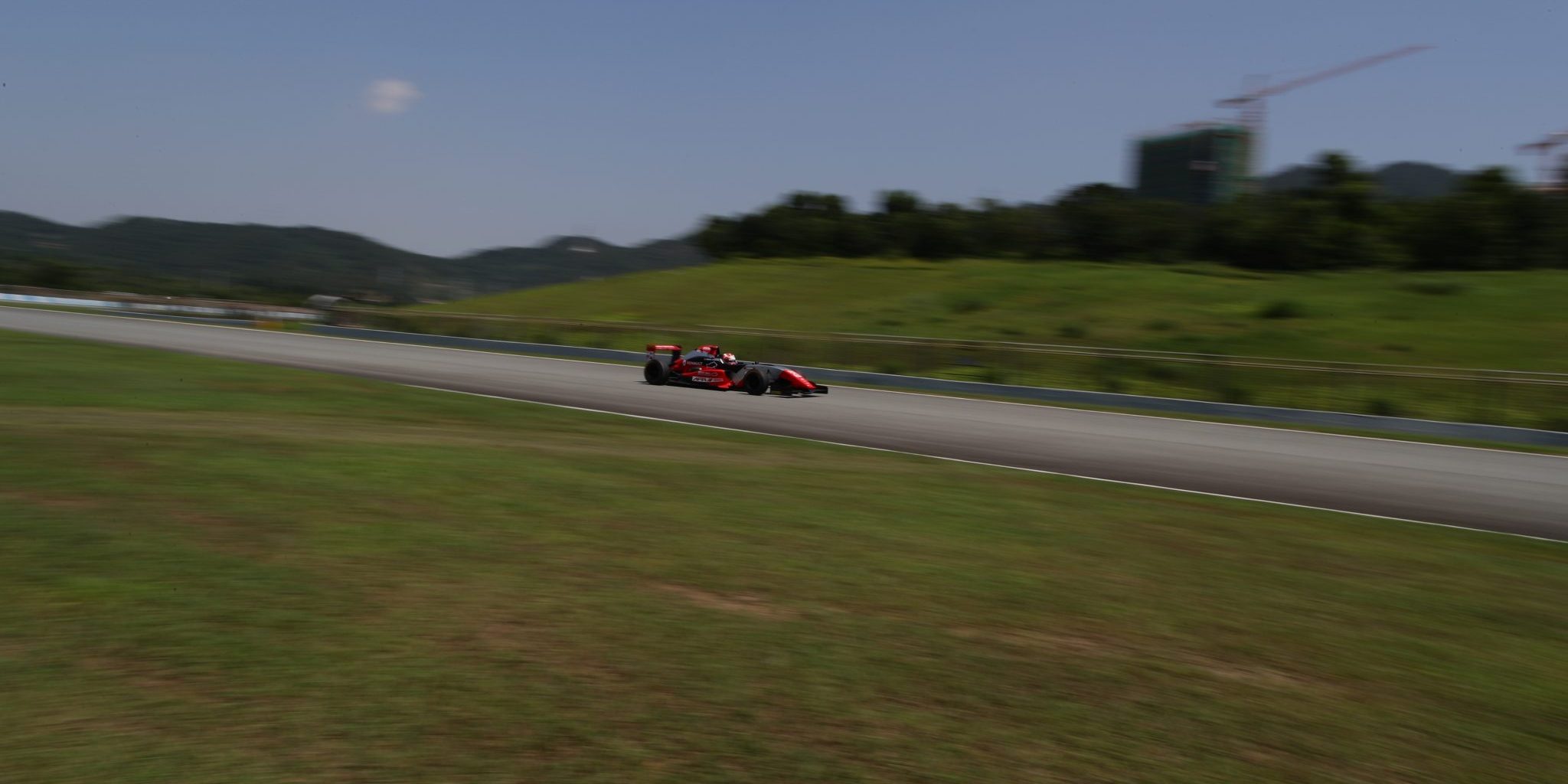 Closing off a rollercoaster season, the Macau-founded Zhuhai-based squad made a welcome return to the podium with two second place finishes of Bruno Carneiro and a third place finish of Peter Li Zhi Cong during the action-packed double-header season finale.

The first practice was particularly strong for the Brazilian driver as he finished the session fastest with Ni Weiliang being fourth. Later on Friday Carneiro posted the second quickest time as Li Zhi Cong was quickly able to improve finishing third at the end of the second practice with Ni Weiliang sixth.

Qualifying followed on the Saturday with sunshine warming the track with Carneiro completing the laps with consistent, solid times which enabled him to start second on the grid just one tenth of first. Teammate Li was third quickest in the session. On second best times, which decide race two’s starting grid, Carneiro was fastest followed by Li as Weiliang wrapped up the top five.

Saturday ended with race one which proved to be a thrilling race for the Zhuhai crowds with Carneiro finishing second despite valiant efforts to challenge for the position ahead. Li finished in third respectively, after lapping in second and in front of his teammate for half of the race. Weiliang finished sixth, right in the tail of the car ahead, as Jack Chan was P8 overall, second in Master Class and winner in the Elite Trophy category.

For the final race of the season, round 12, Carneiro and Li started from first and second on the grid respectively. Unfortunately both Asia Racing Team drivers couldn’t make the most of it, and even before the Safety-Car intervention they have dropped one position each. Carneiro kept the second place until the end, but Li, who was running third, lost another position in the last lap.

Overall this cemented the driver standings for the championship with Carneiro finishing second, and Weiliang sixth. Asia Racing Team finished second in the teams’ standings.

Team Manager Rodolfo Avila said: “A nice way to sign 2019 off. It was a good performance from everyone this weekend, however, an overall win was within our reach. It was a long season, but our drivers can be proud of what they have done. Bruno has really shown a lot of commitment to his racing; he’s got his head down and has a brilliant future ahead of him. Weiliang showed glimpses of good pace over the year, but we know he can do better than what the results show. We are really happy for Jack’s Elite Class win. This is well-earned trophy as he put a lot of effort over the year to make it happen. We’re also proud to have seen Peter back in the podium. After everything he has been thru he really deserves this one.”

With the current season now over, attention turns to the winter testing which starts in two weeks’ time at the Zhuhai International Circuit.

“This has been one of the best qualifying sessions I’ve ever had. Despite the cold temperatures over the weekend, the lessons learnt over the weekend were invaluable. As usual, Asia Racing Team provided me a solid car, and I am happy we ended the season on a high.” “I’m pretty happy with the weekend. Although I still need to improve in some areas, we are on the right path. I managed to close the gap to the frontrunners. Considering that I haven’t been driving since the last race here in June, I’m very satisfied. I am very happy with my first podium in a single seater race since long time. The car was good and the team did a great job.” “The final race weekend of the season didn’t go how I dreamed, by not being champions but me and the whole team gave it our all and I’m proud to be the vice champion! It wouldn’t be possible without the team behind me and getting me to this point! This weekend I got my first pole-position of the season which felt amazing and were matching the quickest times in all sessions as well. In Race 1, we had a very poor start on cold tires and being on the dirty side of the track, but after getting back up to speed I had a good battle with my teammate Peter Li for P2 and then put the pressure on for the win, but I couldn’t do much after that, despite giving it my all! In Race 2, starting from pole, I had a good start but struggled to keep Joey behind me. Once he got past I stayed in his draft and kept up but was unfortunately I was never able to make the move for the win! Again, it was an amazing season and I can’t thank ART enough.” “I am happy how the weekend turned out. I did my fastest lap time of the year at Zhuhai – 1:37.8 – and that was my goal for this season. My first race went well and the second place finish was enough to take the Elite Class title. In race two I tried to overtake the car in front of me, but he moved left and right, fast and slow, and when I made the move he suddenly blocked my line. He was too slow, so I had to brake very hard and spun. I will learn from this. Overall, a good weekend.”