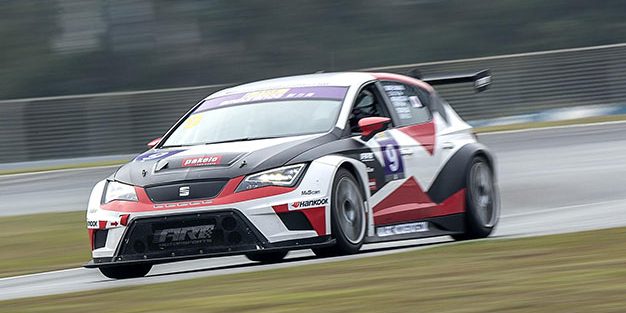 Asia Racing Team kicked off the 2019 racing season with a superb touring car class win and an overall podium in the Circuit Hero 700 km Endurance Race last weekend at the Zhuhai International Circuit.

In what proved to be a rollercoaster 4h45 race with a dramatic end, Daisuke Yamawaki, Akira Mizutani and Sou Fujii, who started from seventh on grid, had a faultless race to cross the line third overall and first of the Class A.

The Japanese trio of the #9 SEAT Leon TCR was calm from the green light and collected throughout, keeping up with the leading pack throughout the interruptions caused by various incidents, eventually putting themselves in position to take the lead in the last hour when the frontrunners hit troubles.

It was a similar story over the other side of the garage. Race-returnee William Cheung and race debutant Sergiel Luk lined up in ninth for this year’s edition of the hard-braking 4.3km circuit race. The #99 SEAT Leon TCR climbed to P7 before half time and managed to run close to the leaders in the class. There was even some late drama as the Hong Kong duo also suffered a tyre puncture with five laps to go, but it wasn’t enough to prevent them to conquer an unexpected but much deserved Class A podium finish.

For the fourth consecutive time Asia Racing Team clinched a podium result in the race, and this was its second win in the top Touring Car category.

Team Manager Rodolfo Avila said, “I can’t see a better way to start the season. We knew we couldn’t match our opponents’ raw pace but we knew our reliability could pay off in a long race like this. Our cars run flawless and our five drivers did exactly what was required. Everyone in the team should be proud of their performance and contribution.”