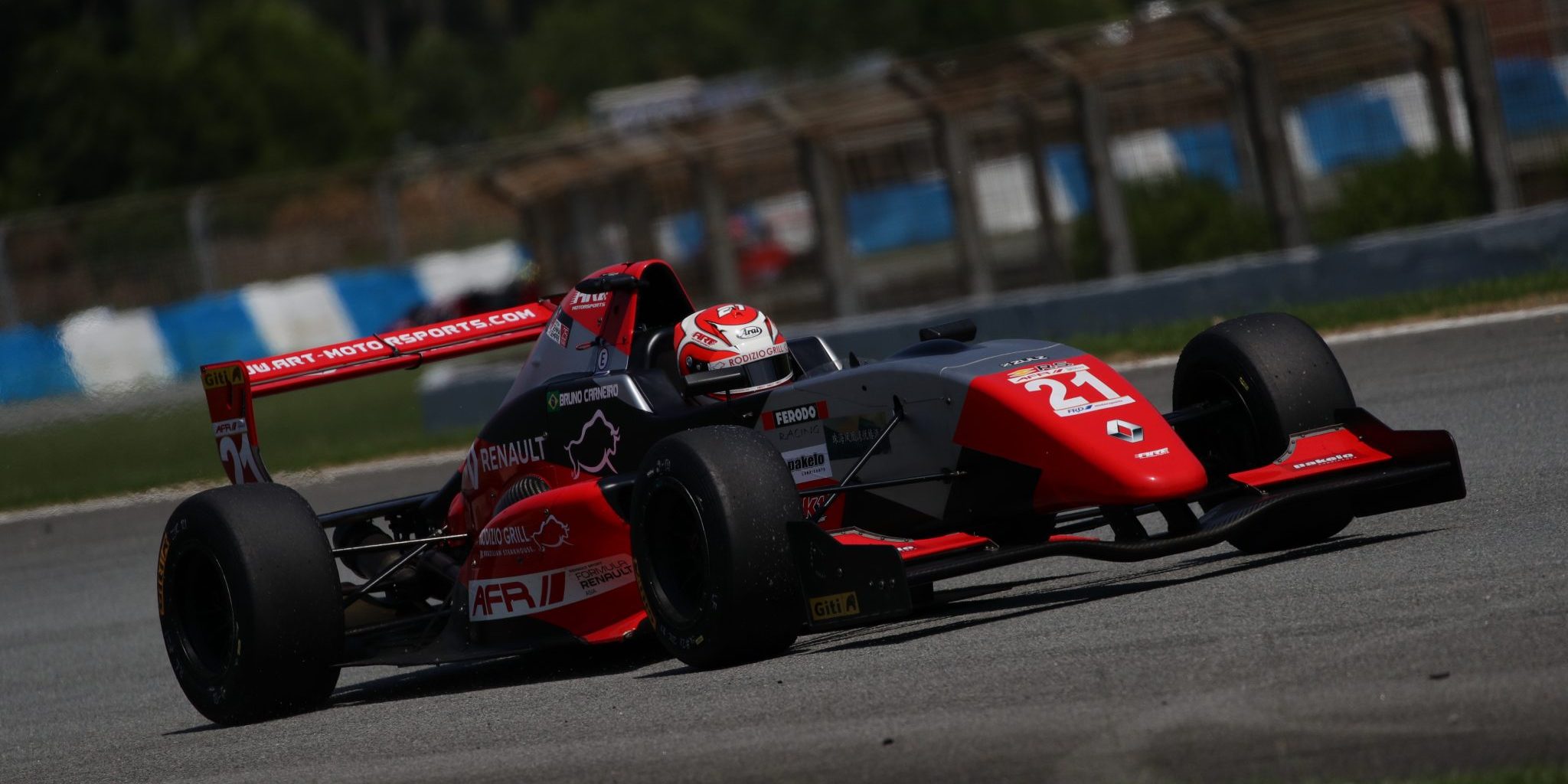 Bruno Carneiro was in commanding form at Zhuhai this weekend (15/16 June) as the Asia Racing Team man claimed his maiden win in the Asian Formula Renault Series at the Zhuhai International Circuit.

Asia Racing Team five-car squad scored a race win, a third place finish and a brace of top-five finishes at the Asian Formula Renault Series’ second trip to Zhuhai of 2019, resulting in the outfit consolidating the team’s lead in the Teams’ Championship.

The Brazilian-born Utah-resident Bruno Carneiro led the way within the team, qualifying second for the opening race of the weekend. In race one Carneiro couldn’t keep his second place, but he managed to claim the final spot on the rostrum. But the best was kept for last. Starting from second on the grid, Carneiro ruled up his sleeves to put out a faultless performance in his #21 Formula Renault Tatuus 2.0/13. Two safety-car periods didn’t prevent Carneiro to clinch his first win in the series. He lies now in third in the drivers’ standings.

Peter Li Zhi Cong weathered a difficult single racing return, but the Chinese driver still managed to round off the top-5 in race one, after dropping to last the start. Due to a gearbox sensor failure the former F3 driver and GT Asia Series champion had to start from the pitlane. After a good first half, the Guangzhou-native was forced off the track trying to avoid a crash in front of him when he was running in fifth.

Carneiro’s Round 4 win wasn’t the single weekend success for the Asia Racing Team drivers. Jack WT Chan took the honours in the Elite Class in both races. The Hong Kong driver converted class pole position into a comfortable lights-to-flag win with an assured drive in the opener. He repeated the result in race two, collecting two second-place finishes in the Master Class.

Pang Changyuan was not expecting an easy ride at the second round of the Asian Formula Renault Series. The series debutant saw his car fail to finish race one due to a driveshaft failure at the start. On Sunday’s race two Pang Changyuan made a good getaway off the line, moving up three places in the classification. Unfortunately a mid-race spin forced out the Chinese driver to retire.

Commenting about the race weekend, Team Manager Rodolfo Avila said: “Our aim this weekend was to make the most of the package we had and we can claim that our drivers succeeded. Bruno drove an amazing second race, and this first place is just reward for all the hard work he has done, along with the team. Jack’s two Elite Class wins and his steady pace show that his pre race preparations paid off. Peter had a strong return, but his results do not reflect his real pace. Weiliang did as much as he could from his starting positions, and Pang Changyuan put in some promising lap times in the beginning of the second race. We are happy to be leading the teams’ standings, but now we most concentrate on the next round in Tianjin, a track that we don’t know so well.”

Rounds 5, 6 and 7 of the 2019 Asian Formula Renault will take place at Tianjin V1 Circuit in three weeks’ time. “Zhuhai was amazing, despite the weather earlier in the week, we had a great weekend of driving, with a decent pace. Till next year Zhuhai!” “It was a tough weekend for me as I didn’t race a formula car since 2016. In the first race I had a slow start and got stuck behind a slow car. We struggled with the front tires, and it wasn’t easy to overtake. In race two I had to start from the pitlane due to a gearbox sensor failure. When I was running sixth, I had to go wide in T1 to avoid a crash in front of me. Once we got some clean laps we could show a decent pace so we can be quite happy at this aspect. So I’ll learn from this weekend and work hard, get myself in a better position for a next race.” “This weekend we got what we deserved, myself and the team, the first victory for me in AFR! After a great week of testing with the team and wonderful coaching and engineering from Rodolfo and Yannick as well as great work from my mechanic Hui, the car was perfect and we were able to make the most of it when it mattered – in the race! This is the first of many to come, and the push for the championship has never been bigger! Thank you ART!” “I am happy with the weekend. Saturday afternoon race was very hot. I could feel the tires losing grip after a few laps. I was happy to finish the race in such conditions. On Sunday I had a bad start and then I chased back the other Elite Class car and overtook him. I had a lot of fun.”